Original article by Darlene Tenes written in 2013 prior to the 300th Anniversary of Fray Junipero Serra birthday.

Last Fall I got excited creating two foodie events - one commemorating the end of the Maya Calendar and the second, the 20th Anniversary of Like Water for Chocolate film.  Many of my dinner guests since then sound like the girl on the AT&T commercial "We want more, we want more!" But I needed to find something that excited me, which turned out to be the 300th birthday of Fray Junipero Serra founder of the California Missions. This was a great excuse for me to put together a California Missions & Wine Adventure which I've wanted to do for years as well as a multi-course dinner featuring Native-American and Spanish foods from the Mission period. 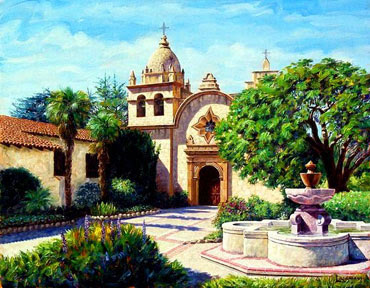 I envisioned having an incredible candlelit dinner al fresco on the grounds of a mission. So I started chatting with folks from the Diocese of Monterey which has seven California Missions and the Royal Presidio Chapel in its territory, including Mission San Carlos de Borromeo de Carmelo aka Carmel Mission.  The Mission was originally established by Junipero Serra at the presidio in Monterey in 1770, then was relocated to Carmel, the seventh and current mission was dedicated in 1797. The 2nd mission built in the 21 mission chain in Alta California was Serra's favorite and where he was laid to rest.

A little birdie whispered in my ear, "You've got to have it at the Orchard House." Okay, what's the Orchard House? I very quickly learned that question was easier asked, than answered. I feel as though I have been an investigative reporter trying to dig up information about this place, calling people and researching historical documents. The truth is being a lover of history I got a little obsessed, and after much sleuthing, this is what I discovered. It turns out the Orchard House is an adobe built in 1774, and the oldest residential dwelling in California.  So you would think there would be brochures, a map, regularly scheduled tours. Nooo!

I feel the need to take a step back in California history so you can understand why this place is such a well-kept secret. I'm going to start from the beginning, condensing thousand of years in one long paragraph. Wish me luck. 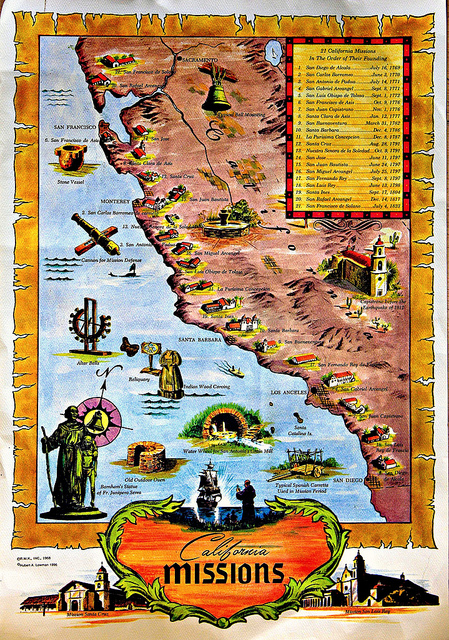 First the California Native-Americans were here for roughly 15,000 years with the population estimated at 300,000 prior to outside contact. Around 1530, European explorers from many parts cruised the coast of California (Alta & Baja), which at that point was one long strip of land not "owned" by anybody. In 1695, the Spanish Jesuit missionaries began to establish dozens of missions in Baja California, until they were expelled and replaced by the Franciscans, who  established one more mission in Baja and 21 missions in Alta California. While the Franciscans where busy in the north, the Dominicans arrived and by 1800 had established nine more missions in Baja. The Spanish colony of California was officially divided into Alta and Baja California and the Catholic Church owned most of the land. During the Mexican War of Independence, Mexico fought and gained its independence from Spain in 1821. In 1834, Mexico decided to secularize and end the mission system, granting all of the lands previously owned by the Catholic Church to private individuals, resulting in the destruction or ruin of most of the missions. Gold was discovered in 1848 and Alta California became a territory of the USA and a state in 1850, while Baja California remained a territory of Mexico.  In 1863, after 30 years of vandalism and neglect, President Abraham Lincoln signed an Act declaring that all of the 21 missions in the Alta California mission chain would once again become the property of the Catholic Church. Okay, I'm going to stop here and go back 100 years to 1770 when the Carmel Mission was established and where the history behind the Orchard House comes to play.

In 1774 Franciscan missionary Fr. Francisco Palou planted a pear orchard along with a selection of olive, apple, quince and other fruit trees and a kitchen garden growing culinary and medicinal herbs as well as roses and bougainvillea between the mission and Carmel river. A one story adobe lean-to was constructed against the existing garden wall for the orchardist and caretaker of the mission to live.

As you previously read, there was a lot of turmoil going on in California history and decades of time is virtually lost. A journal entry discovered from William Brewer from May 4, 1861 stated, "We visited the old Mission of Carmelo... It is now a complete ruin, entirely desolate, not a house is now inhabited. Cattle had free access to all parts; the broken font, finely carved in stone, lay in a corner; broken columns were strewn around where the altar was; and a very large owl flew frightened from its nest over the high altar...A dead pig lay beneath the finely carved font for holy water... and the number of ground squirrels burrowing in the old mounds made by the crumbling adobe walls and the deserted adobe houses was incredible-we must have seen thousands in the aggregate... The old garden was now a barley field, but there were many fine pear trees left, now full of young fruit. Roses bloomed luxuriantly in the deserted places, and geraniums flourished as rank weeds. So have passed away former wealth and power even in this new country."


Carmel mission was in ruins when the property and nine acres of land was returned to Bishop Joseph Sadoc Alemany and his successors by President James Buchanan in 1859. In 1870, Father Angelo Casanova came to the Royal Presido Chapel in Monterey, which remained an active parish, and took an interest in the ruins of the mission at Carmel. He began providing tours of the mission ruins and in 1879 reported taking in $11.50 for the year. This piqued the interest of Jane Stanford, the co-founder of Stanford University, and other affluent visitors that frequented the nearby Hotel Del Monte resort to help fund the partial restoration prior to its Centenary in 1884.

The Orchard House was mostly likely vacant, with the exception of squatters, for close to 50 years until 1872 when Christiano L. Machado, a whaler from the island of St Michael's in the Azores, moved in. Machado served as the mission caretaker and orchardist adding 200 new trees to the orchard.  His family lived in the adobe until Machado built a two story redwood-frame Victorian home next door in 1880s, known now as the Machado-Tevis House. The Machado family cared for the mission grounds and orchard for 48 years, leaving in 1920.

About 1921 artist-architect Jo Mora has contracted by Fr. Menstres to rehabilitate and expand the adobe. The remodeling of the Orchard House included a large fieldstone chimney by stonemason Juan Martoral, refurbished tile roof, new brick floor, garden patio doors and replastering. The kitchen and bathroom were located in the adjacent Machado-Tevis House. Fr. Menstres original intention was to use the home for visiting dignitaries to the mission, but now that it was all prettied-up, Clarabel Haydock Zuck (Carmel's first female mayor) and Mary M. Smith convinced him to sell them the 2.5 acre property in 1924 which they would open as the Mission Tea House. This popular Carmel dining spot served lunch, afternoon tea and were known for their tasty chicken enchilada dinners. The onset of the Great Depression, beginning with the Wall Street Crash of 1929 forced its closure.

It became a home again when the property sold to Lloyd and Lee Pacheco Tevis and they moved in with their two young boys. Trevis was a descendent of Romualdo Pacheco, the 12th governor of California, who remains the only Hispanic or Latino governor in the state's history as part of the U.S. and  Lloyd Tevis who was president and had controlling interest of Wells Fargo Company. The elder Tevis also co-owned the second largest cattle and sheep holdings in California and amassed gold, silver and copper mines in five states selling his shares in the Anaconda copper mines to a syndicate led by John D. Rockefeller for 8 million in 1899.

The Tevis family expanded their home in the 1930s adding an artist studio, billiards room, butler and gardener quarters and a swimming pool. In the 1940s, after purchasing an additional acre of mission land, the family hired Sir Harry Downie, known for his understanding of authentic Mission architecture, to expand the adobe with a kitchen, dining room, butler's pantry and installed one of the first water circulated radiant heating system in the country. When the plumber was asked if they needed a new boiler he responded, "I don't want to say the boiler is old, but its only a 3 digit serial number and the first two are zeros."

At the same time Sir Harry Downie was appointed the Carmel curator in 1931 and dedicated almost 50 years of his life to the restoration of the mission and adjacent buildings. Today it is one of the most authentically restored of all the California missions. Because of his tireless efforts in 1980 the Harry Downie Museum at the mission was named in his honor and Harry and his beloved wife Mabel are buried alongside the church.

The Trevis family remained there until Sir H. Lewis Charles Scott, a well-respected antique dealer and co-owner of Keller & Scott Antiques purchased the Orchard House in 1976. Scott was an excellent chef and well-known host, sharing his home and gardens for fundraisers benefiting local charities and civic groups. He later was honored by the Vatican as a Knight Grand Cross of the Equestrian Order of the Holy Sepulchre of Jerusalem.

In the 1990s he assured that the property would be returned to the Diocese of Monterey under the direction of Bishop Sylvester Ryan. Scott maintained a life estate on the property which essentially meant that he could live there until his death. He passed away quietly at his home on February 13, 2011 after a lengthy illness due to Alzheimer's disease. In October 2011, after 87 years the Orchard House was once again part of the mission.

Historically, the original Orchard House adobe, which now comprises the living room of the main house on the property, together with the Basilica, is the only other building remaining from the mission period. The adobe has the original unglazed windows and shutters fitted with rawhide hinges and wood grating. There are four ancient pear trees that still bloom, planted in 1774 by Fr. Palou. The El Camino Real at one time ran parallel to the adobe and is perhaps the last unpaved section of the famous "Royal Highway" in California which connected all of the missions separated by one long day's ride on horseback or three days walk.

Currently, it is still a private residence not open to the public and is the home of the pastor of Carmel Mission.

I have since been able to get a sneak peek of the rarely seen Orchard House adobe and its quaint gardens. What a perfect setting it will be for this once-in-a-life-time dining experience celebrating the 300th birthday of Fr. Junipero Serra at this historical location.  Little birdie, you were correct. We've got to have it at the Orchard House!